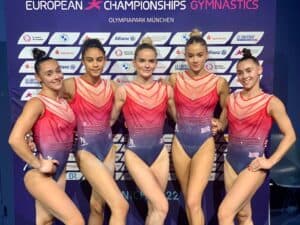 The Gymnastics World Championships start in Liverpool on Saturday, and BBC Sport has live coverage of all the finals.

Following a successful summer at the Commonwealth Games and European Championships, Great Britain’s men and women have high hopes for medals in both the individual and team competitions.

The men’s team of Joe Fraser, Giarnni Regini-Moran, Jake Jarman, James Hall and Courtney Tulloch will be going for an unprecedented treble as they seek a third team gold in the calendar year, having triumphed at both the Commonwealth Games and European Championships.

Qualifying takes place over the first three days with the finals – and live BBC coverage – beginning on Tuesday, 1 November.

The championships are the first opportunity for nations to qualify for the 2024 Olympics in Paris. The top three highest-ranked teams in the team finals will automatically qualify a team of five gymnasts for the Games.