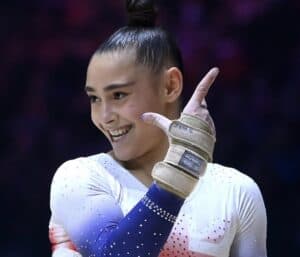 The top three contenders for BBC Young Sports Personality of the Year 2022 have been announced live on Blue Peter this evening.

The top three are (in alphabetical order):

Sky Brown (14) has had another brilliant year, including a successful defence of her X Games Skateboard Park title. She put in a flawless trick-laden run to beat the reigning Olympic gold and silver medallists, and repeated the feat in Des Moines on the Dew Tour a week later. Sky was the recipient of the Young Sports Personality of the Year award last year in 2021.

Jessica Gadirova (18) is one of the rising stars in artistic gymnastics. Jessica became Great Britain’s first female all-around medallist at a World Championships this year by taking home a bronze. She also won gold on the floor, which made her only the fifth British individual gymnastics world champion in history. Jessica retained her European title on the same apparatus and was part of the silver medal-winning British women’s team at both the World and European Championships.

The panel selected ten outstanding young sportspeople from a longlist before narrowing down to a top three and winner, who will be announced on the night of the show.

BBC Sports Personality of the Year 2022 will take place on Wednesday 21 December from 6.45pm on BBC One live from Salford.

For voting criteria on all awards please visit https://www.bbc.co.uk/sport/sports-personality